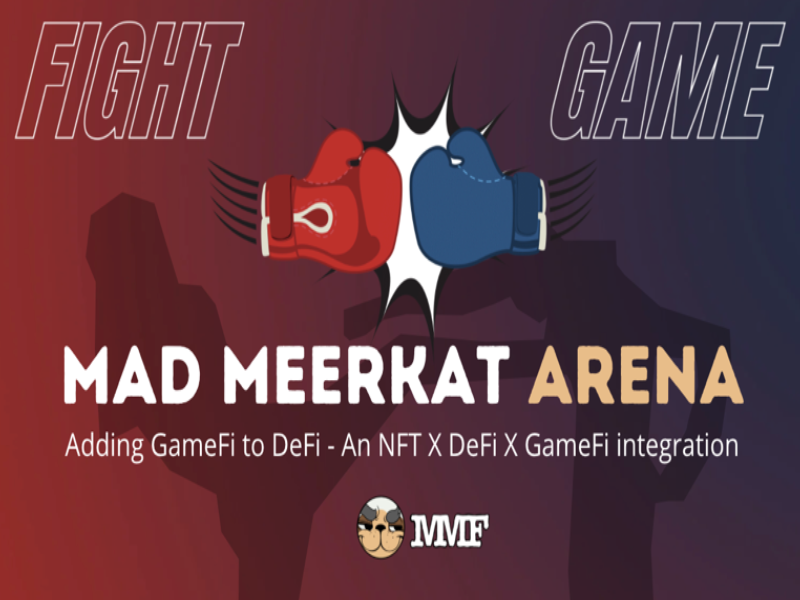 This article originally appeared on the MMF Community Medium

Hi Burrow, having recently attained a 1 billion USD in our ecosystem TVL, we are proud of what we have achieved. However, our team is not one to simply rest on our laurels. What’s next? It is in this spirit of constant endeavours that we come up with innovative ideas to enrich your DeFi experience. Today, we think we have the next big thing for you. We bring to you, a full-on integration of NFT, DeFi and GameFi, pretty much the first series (of many) which could be our very first step into anything remotely closely to a metaverse.

The Mad Meerkat Arena (MMA) is a Play-To-Earn game with unique tokenomics and click-to-play gameplay design that incorporates the $MAD token, $MMF token, $MMB NFTs, and a new $MMG token.

This is an ambitious undertaking from our team, but we feel that this is the only way to truly bring the Mad Meerkat brand global (renowned across many chains). This GameFi mechanics that we have designed, is a bullish development for the entire MM ecosystem overall.

Why? The $MMF token will be used as a gas token in the game (similar to how CRO is used on Cronos Chain and AVAX is used on Avalanche Chain)!

This means that $MMF tokens will embrace the privilege of being a layer 1 token in our Metaverse, where certain in-game actions require $MMF token as a means of gas. We foresee our GameFi bringing many new players (and eventually $MMF token holders) from many chains. More users vying for a limited set of resources: $MMB NFTs, $MMF tokens, $MAD tokens, etc will serve only one purpose — drive up demand for all our ecosystem assets.

Without much ado, we introduce some of the exciting game mechanics that makes our game special. (Sneak peaks to come in a part-2 article).

Each MMB will enter the MMA World as a Mad warrior. Each MMB will receive a certain number of Stats points. You can then decide how best to allocate them accordingly. No changes can be made once allocated. Once completed, each MMB will start off at Level 1, where defeating monsters and other players in PVP will allow the MMB to gain experience and be able to farm Mad Meerkat Gold ($MMG token) — the dedicated in-game currency.

In essence, there are 6 main mechanics (with more to come in the future) in the MMA world:

As observed, the $MAD token and $MMG tokens exist in the world of MMA to ensure a smooth and rewarding gaming experience. The $MAD token is considered to be a scarcer resource where its prime usage is to be used in attaining equipment to buff up your MMB. The $MMG token is the main gaming currency that you will be rewarded for partaking in most actions in the game. Finally, players of the MMA game will also be required to hold $MMF tokens as the $MMF token will be used as the “gas token” for the games. Every time users trigger a “fight” either in the wilderness or in the arena, a small amount of $MMF tokens will be deducted from their wallet as gas.

How does this work?

The MM team has built a battle simulator feature that will perform RNG (random number generator) functions to determine winners of a fight. For such a feature, the MM team will be paying gas on behalf of the user through the use of $CRO tokens (which means that CRO tokens will not be deducted from users’ wallet). Instead, the MM team will require users to pay a nominal fee for the gas when triggering fights with NPCs or other players, and the token of choice would be the $MMF token.

There are a total of 4 main stats for each character: Strength, Dexterity, Agility, Accuracy. Each of these stats will alter the Attack, Defence, Evasion, Hit-Rate, and even Hit Points of your MMB character. When your character gets sent into a battle, you will be battling either an NPC or a player of which have their own stats. The characters will be sent into our battle engine where each character will take turns to attack. The ultimate winner is the one who manages to reduce the hitpoints of the other to 0. Whenever a fight is won, you will be able to earn $MMG tokens. These tokens can be used to level up your character, or you can sell it on MM Finance. When leveling up your character, it will gain stat points which will allow you to further improve your character. Beyond that, stats can also be improved when you purchase rare equipment for your character with the use of $MAD tokens.

Why is this a big deal?

We believe that this is a potentially mad stepping stone towards building one of the biggest and most sustainable games on Cronos chain. Should this be successful, the spotlight will once again shine on Cronos, attracting more users from other chains here. Moreover, this creates an opportunity for further integration into the MM ecosystem as MMA will require users to use $MMF tokens like a gas token, which means that there will now be more holders of the $MMF token. Beyond that, we are excited at the potential of incorporating different game mechanics, and we are certain that the $MAD and $MMG token will work hand in hand to allow users to sustainably use our platform as the best play-2-earn platform.

In our Part-2 series, we will share more details on the tokenomics behind $MAD and $MMG tokens, and how everything comes into play.