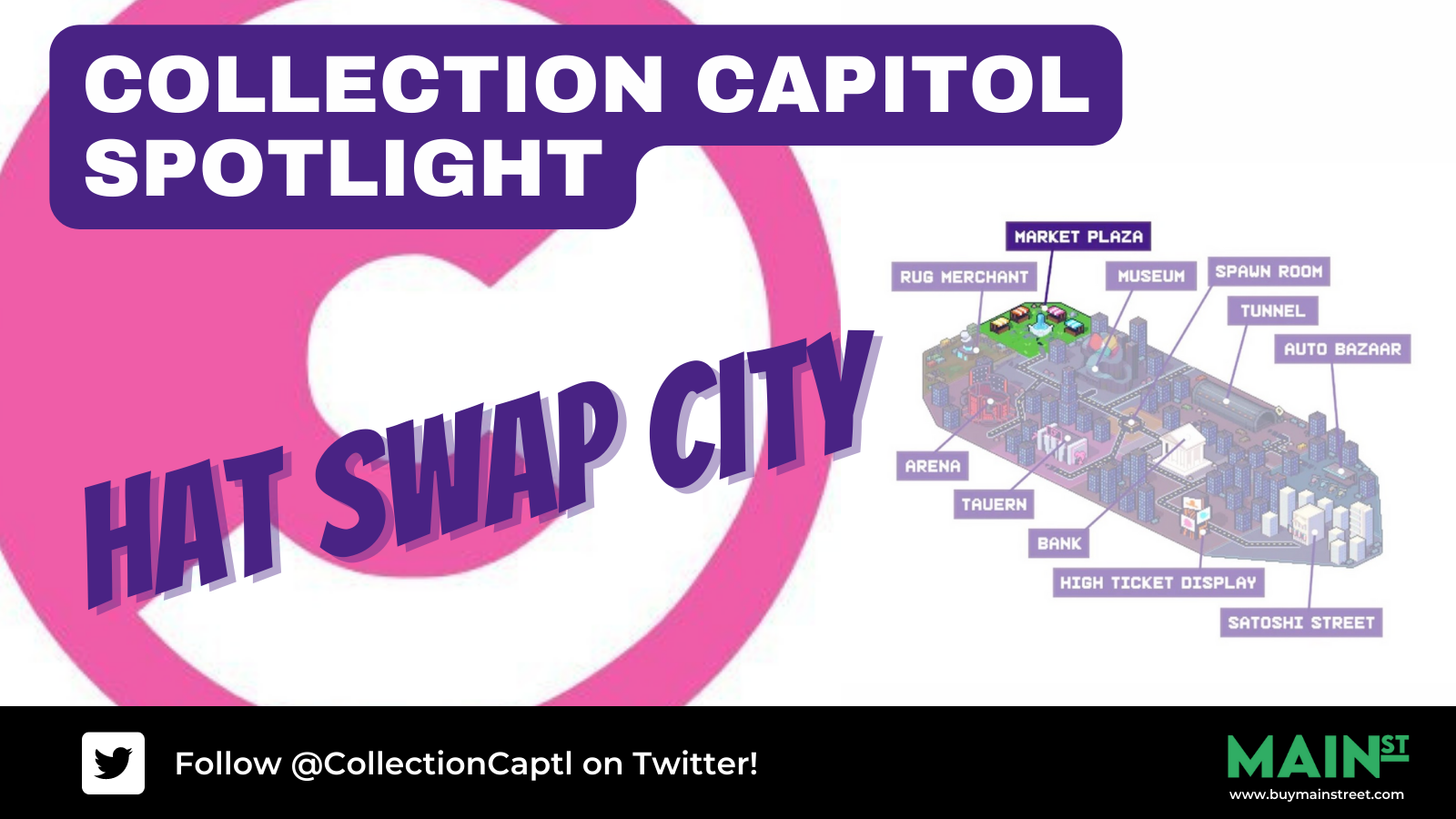 HATS ON! Own Your Destiny! You’re in the Hat Swap City!

Even in a bear cryptocurrency market.

A unique NFT collection, Hat Swap City’s NFT hats are the real game in the surreal metaverse. Built by a fully dedicated and doxxed, visionary team of web3 builders, it’s worth immersing in the Hat Swap Cityverse. Still wondering why? Let’s dive right into it then, here we go.

The Hat Swap Cityverse is where the players:

Did you know: The Cityverse’s very first district will go live this Spring.

Hat Swap City: The Cityverse is MINTING LIVE via Hatcoin!

Courtesy of the Chainscape Games INC. World’s first immersive NFT marketplace thriving in a social MMO, Hat Swap City lets you explore the pixel metaverse of tomorrow. Earn tokens and NFTs with the mini-games, whilst chatting with your dear friends. Hat Swap City is a multiplayer social game that hosts and boasts elegant chatting features with an in-game NFT marketplace. With the Hatcoin as its in-game currency, the Hat Swap City dawns futuristic blockchain technology, designed to enlighten cryptocurrency traders. The Cityverse’s fun-filled mini-games are where the players earn the Hatcoin currency and NFTs.

Hat Swap City is the world’s first project to gamify the digital asset trading experience. Upon logging into the Hat Swap City, either of the supported blockchains’ NFTs in your wallet would be displayed in your inventory. These NFTs can then be exchanged in-game with other players for supported currencies.

Learn how to play Hatman. Learn more about Hatman

Dungeons of the Dead Hatter

‍
Dungeon of the Mad Hatter, a hardcore roguelike dungeon crawler, features your Hat Swap City Character in the game. You will spend your HTC (Hatcoins) to play. By playing this game, you can earn NFTs and unlock special rewards via daily achievements and level completions. Exciting perks and attributes will be offered as per your NFTs.

Enlighten the world’s PvPers by risking your Hatcoin (HTC) or NFTs while playing against identical skill players. Fast-paced combat with a twist and magic.

Hat Swap City metaverse participation offers players various engagement alternatives. An excited meta-gamer should play all mini-games to earn token and NFT rewards to progress their city character further. Social gamers will immerse themselves in the district-wise cityscape and micro-societies.

Hat Swap City will form varied types of partnerships with NFT Projects. The integration levels are as follows:

Hat Swap City intends to build proprietary technology that benefits video game studios willing to add digital assets on the blockchain. Their game studio partners would be assisted in their endeavor of integrating their game assets into web3 protocols. By doing so, they would enhance the Cityverse’s value via boosting NFT traders’ avenues.

The Hat Swap City is home to the world’s first live-action NFT bazaar. Users would simply log into the bazaar for appearance customization depending upon the NFTs in their wallet. They can then trade with other users for NFTs for any (supported) video game. Hat Swap City is built on the strong basis of open air markets’ potential of building robust community bonds (as the foundational cornerstones of multiplayer platforms).

In the Hat Swap City’s in-game NFT bazaar, a number of access tiers would be offered depending upon the NFTs held (as against the old school subscriptions-based model). Hat Swap won’t take the NFT exchange route as exemplified by AirNFT or OpenSeas.

Hat Swap would rather develop an active forum and social media channel for the Hat Swap Bazaar. This Bazaar would let people share their wares to sought buyers’ interest, to then initiate their transaction deals in the game bazaar.

Hat Swap City gamifies the online market experience via speculative mini-games and adventure. The release of a “trade2earn” system that awards swapping is also what sets Hat Swap apart from the competition.

Why are the Hat Swap City HATS Special?

With on 5K hats available in total, there are 58 Unique Hattributes (in the form of accessory, background, and vignette). The cute, collectible and unique HATS of the Hat Swap City belong to the Hat Swap Founder Series (HATS). These are the 8-bit Hat Swap City video game wearable hats. Developed via a procedural generation matrix using backend logic, each of these hats feature a unique variable combination. A total of 5,000 HATS will be minted under the Founder Series. A special feature of these HATS is their ability to secure a spot for you in the Hot Swap City video game (beta).

The Hattributes that tend to make your NFTs unique are: type of hat, color of hat, accessory, background, and Lore. While a majority of them are "profile picture" NFTs, Hat Swap City hats have Lore. This world-building Lore is a central Hat Swap City element. This means your hat’s story would have a considerable influence on you upon dawning it in-game. The Hat Lore is what makes each hat unique. Simply play our games or collect via NFTrade.com.

Why Hat Swap City: The Rationale

Team Fortress 2 (TF2), under its Orange Box series, released hats (a customizable status symbol) as a genuine innovation. But TF2’s success rose to fame when in 2011 analyst Paul Manwaring attributed TF2 Hat market a valuation of over $50 million.

The success of TF2 and CS:GO calls for deploying not-so-easy-to-implement and costly merchant processing platforms and in-game digital authenticity items. Then managing the large “gray market” around the items poses unique challenges of its own.

Digital (in-game) purchasers often voice their concerns pertaining to the eroding asset value post exiting the game. Gamers tend to face questions like “you paid for that, what does it do?” Paying money for easily duplicable digital assets yielding almost nil value other than the in-game ones tend to make them obsolete on an early basis. This inherent (core) problem is solved by Hat Swap City via minting NFTs for the generated game item. Hat Swap City’s NFTs carry bankable value, allowing the player to exchange it for a fair value at their will.

The Hatcoin-fuelled Hat Swap City allows buying in-game items, rare NFTs, and play-to-earn games participation (and sustenance via consumption) via Hatcoin. Together rare NFTs and Hatcoins increases in-game time of the players. Sell and mint NFTs or access fresh game content via Hatcoin. Cityverse’s medium of value, the Hatcoin is central to drive the active daily players, and enable character customization demand. With the expansion of the Cityverse, citizens would increase, demanding more Hatcoin.

Hat Swap City is a partner of the CollectionCapitol.com NFT Marketplace. You can buy, sell and trade your Hats and Clothing on Collection Capitol.